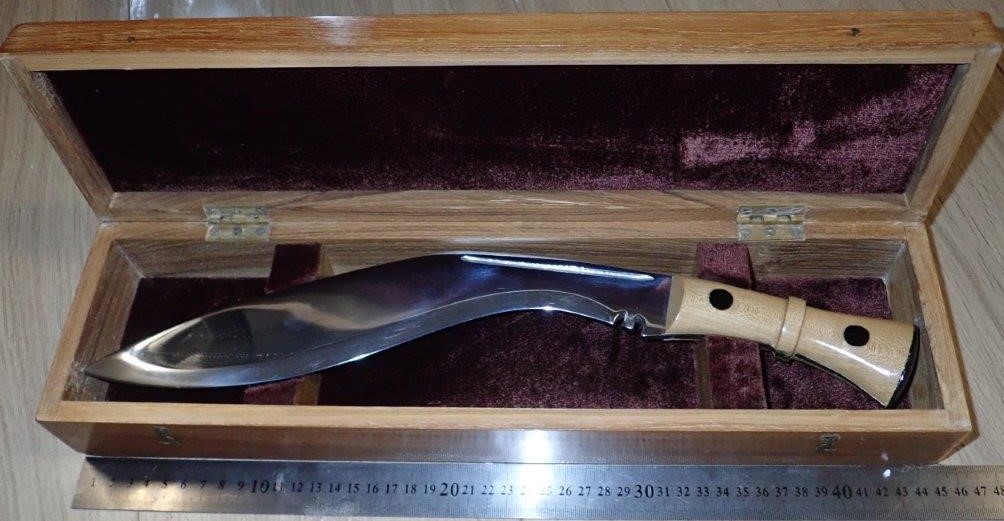 B976 Superb cased 1960 Presentation Kookrie Gurkha knife.
This knife was presented by Adhar Kumar Chatterji-Born 1914-Died 06 August 2001 (aged 86–87)
New Delhi Allegiance British Raj India
Service/branch Royal Indian Navy -Years of service 1933–1970
Rank Admiral
Commands held Chief of the Naval Staff
Flag Officer Commanding (FOC), Fleet
Commander-in-Charge, Bombay Command
INS Delhi (1948)
Battles/wars- World War II
Liberation of Goa
Indo-Pakistani War of 1965
Adhar Kumar Chatterji (1914 – 6 August 2001) was the Chief of the Naval Staff of the Indian Navy from 4 March 1966, until 28 February 1970.] He was the first Indian officer of the navy to hold the rank of full Admiral.
Chatterji was one of the first Indian cadet-entry officers to join the Royal Indian Navy in 1933. After training on board TS Dufferin, he was sent to the United Kingdom. He was commissioned into the Royal Indian Navy as a sub-lieutenant on 1 September 1935, and was promoted to lieutenant three years later in 1938.[3][4]
He qualified for anti-submarine warfare in 1940, and served in World War II on board various Royal Navy and Royal Indian Navy ships in the Atlantic and Indian Ocean zones. He also served as an instructor for crash courses in anti-submarine warfare at Royal Navy training establishments during the war. An acting lieutenant-commander at the end of the war, he was promoted to lieutenant-commander on 1 September 1946.[5]
In August 1947, Commander Chatterji completed the staff course in the United Kingdom and on his return, was appointed Director of Naval Planning at Naval Headquarters in New Delhi.
In June 1950, as an acting Captain, he assumed command of the flagship of the Indian Navy INS Delhi (1948). He was the first Indian officer to command the cruiser.
Between November 1950 and January 1953, Chatterji was the Naval Adviser to the High Commissioner of India to the United Kingdom. He oversaw the training of hundreds naval cadets and junior officers in the UK. He was promoted to the substantive rank of captain on 30 June 1951.[6]
Upon his return, he was appointed the Commander-in-Charge, Bombay, with the acting rank of commodore. The Bombay Command was the predecessor of the Western Naval Command. He held this appointment for two years.
Following the completion of a leadership course at the Imperial Defence College, Commodore Chatterji was appointed the Deputy Chief of the Naval Staff on 8 February 1958, with the rank of Commodore 2nd Class.[7] He was promoted to rear admiral in March 1959.
In May 1962, Chatterji took over as Flag Officer Commanding of the Indian Navy Fleet.
In January 1964, Chatterji was promoted to acting vice admiral and took over as the Commandant, National Defence College. On 4 March 1966, he was appointed the seventh Chief of the Naval Staff of the Indian Navy. He was confirmed in his rank of vice-admiral on 22 November 1966,[8] and was promoted to the rank of admiral on 1 March 1968, the first Indian officer to hold the rank.
Admiral Chatterji retired from the Indian Navy on 28 February 1970.
PRICE-$900